Anyone who has followed this blog knows I love musical theater and that Hale Center Theater both in Orem and West Valley are two of the finest regional theaters in the country.  I would truly hold their productions up to anything I’ve seen on Broadway.  You probably also know I am a die-hard Les Miserables fan.  It was the first music, not just musical, that made a significant impact on me and I’ve seen it 3 times on Broadway.  So it was with a great deal of enthusiasium I went to see The Pirate Queen at Hale Center Theater written by Les Mis composers Alain Boublil (lyrics) and Claude- Michel Schonberg (music).

The Pirate Queen tells the true story of Grace O’Malley the daughter of an Irish Chieftan in the 16th Century.  She’s a fiery lass and wants to hit the open seas with her father.  There’s a lot of bold female talk in this musical including songs called ‘Woman’, ‘My Grace’, ‘The Choice is Mine’, ‘Boy’s’ll Be Boys’, ‘She Who Has All’ and ‘Woman to Woman’.  There’s a point where it goes from bold to a little cheesy and patronizing.  It’s kind of like if someone is telling you too often you look beautiful, you probably don’t look that beautiful…

Anyway, Grace gets on the open seas and ends up involved in conflict at sea, in arranged marriage, forbidden love, sword fights and even confronting Queen Elizabeth.  She even gets in a sword fight just after having a baby.  It is quite the lass indeed!

All of this is done with tons of flair by Hale Center Theater.  The costumes are particularly stunning capturing that Elizabethan feel perfectly.  The Irish dancing is a lot of fun  and feels right out of Riverdance!  As always with Hale, the singing was excellent.  I saw it with Bre Welch as Grace and Cecily Ellis-Bills as Queen Elizabeth.

You can get a feel for it in this little promo:

The problem is, and it pains me to say it, I thought the songs and music were really poor especially being they are from Boublil and Schonberg.  I left not wanting to download a single song.  Nothing was memorable or even stood out as a big number.  It all kind of meshed together.  B and S’s musicals are practically all music so if it isn’t good that’s a huge problem.

As far as the script the plot and dialogue were also weak. I get it is a true story but Grace felt like a stock, predictable character. There was no break out moment like Dreamed a Dream or On My Own and most of the side characters were completely forgettable unlike Les Mis. (I know tough to compare to Les Mis but I can’t help it when it is the same writing team). 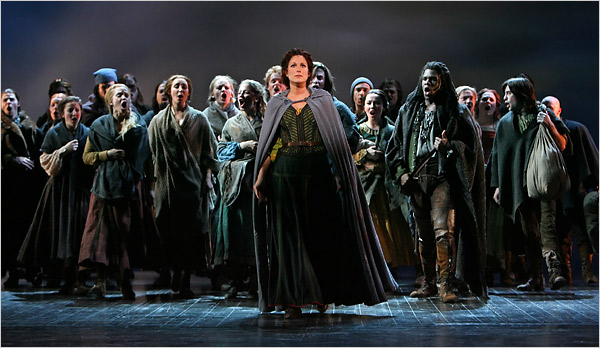 It’s not like I was miserable or something.  If you want a generic, well put together play than you’ll enjoy it, but I’d be lying if I said I wasn’t disappointed.  The whole thing just felt very flat and soapy when it should have been epic and engaging.

But I certainly appreciate the effort put in by the cast and crew.  Like I said, they did everything they could to elevate the weak material, so I give them a lot of props.  Hopefully Boublil and Schonberg will be able to find their mojo and write something better that Hale can than elevate soon.

Have any of you heard of this play?  Does it sound intriguing to you?  In a way I kind of wish the story could be retooled and tweaked because there is potential there.  It reminded me of Hale’s production of Scarlet Pimpernel and Zorro both which had way more memorable music and in a musical that’s kind of important. Oh well!