Yesterday I had an interesting experience. At my local cinemark movie theater they have a ‘Cinemark Classics Series’ where twice a month or so they will have a movie ‘classic’ on the big screen. I try to go to as many of these as I can and you can even get them at a discounted rate.  In last year I’ve seen rereleases on big screen of films such as Roman Holiday, It’s a Wonderful Life, My Fair Lady, Home Alone, Back to the Future, Blade Runner, Breakfast at Tiffany’s and more.  These have all been great experiences.

However, what was interesting about last night is I went to a movie I knew nothing about except that it was a ‘classic’.  I saw the John Huston classic ‘Treasure of the Sierra Madre’.  I knew this was a Western with Humphrey Bogart and that was about it. 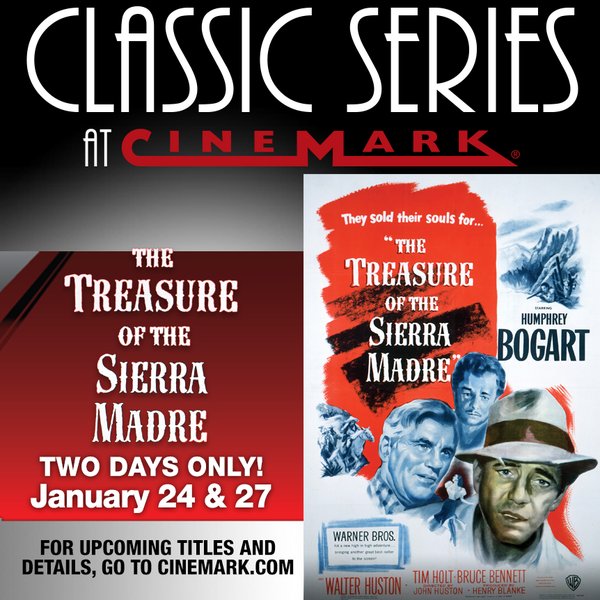 I ended up loving the movie!  It’s not just a Western but it’s a nuanced and gripping portrayal of a man going crazy over greed.  The moral conflict was much more interesting than anything that happened to them physically.  Bogart starts off assuming he will do the right thing but as the curse of money grips him he becomes more and more of a savage.  The script is so well written and I completely bought the transition.

You can read the rest of my review here but I guess what struck me is that sometimes you can trust ‘a classic really is a classic’.  You could make an argument for only seeing classics I could understand.  The movies have had the chance to sift through and eliminate the turkeys.  With modern movies we don’t have that option.  Of course, I don’t love every classic but there aren’t many that I hate.

Isn’t that interesting? It’s the same way with all the classics- classic books, classic stories, classic TV shows, even classic recipes.  They are the tried, true and tested of the world, and you can rely on them to be good most of the time.

What was particularly striking is there was a lot in Treasure of Sierra Madre that reminded me of the current Oscar frontrunner The Revenant.  It’s a decent flick but I think Treasure is far superior despite having many of the same elements.  They are both about hardened Westerners.  They both have gritty survival stories and both feature stories of greed and revenge. But Treasure is so much more subtle and nuanced than The Revenant.  It also gave me more moments to breath and empathize with the characters where The Revenant is kind of unending in its repetitive beatdown of its characters.  Again, not saying The Revenant is a bad movie because it isn’t but when compared to a true classic it falls far short of where it needs to be.

I wonder if many movies could be looked at that way (or novels for that matter).  If you held them against their classic doppleganger the flaws in the new become much more apparent.

So cheers to the classics!  What are classics you like?  Or what is a movie you’ve watched recently where you thought “____ movie did that better”?  Are there contemporary takes on characters or stories you think did the concepts or stories better than the classics?  Please list in the comments section.

Do you ever go to the theater to see the classics?  It’s a ton of fun if you get a chance.