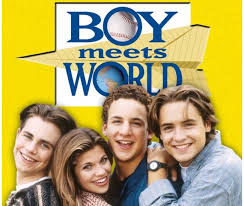 I’ve told you about a lot of entertainment over the years.  Well, let me tell you about another show that I know isn’t exactly great entertainment but I have a nostalgia and affection for.  I kind of grew up with ABC’s family friendly TGIF lineup and the great Disney Afternoon.  In particular there was  a little show called Boy Meets World.

I’m not going to try and defend this show as original or groundbreaking.  In fact, I will say out front it is predictable, sentimental and syrupy but it also has real heart and actors with charisma and chemistry together.

So, the show centers around Cory Mathews a kid in Philadelphia, his brother Eric, best friend Shawn and crush Topanga.  Cory is played by the brother to Wonder Years star Fred Savage, Ben Savage.  Shawn, Cory, Topanga are all taught by their hard nosed but dedicated teacher Mr Feeny played by William Daniels (who’s participation takes the show up a huge level in acting and storytelling)

Mr Feeny manages to follow the boys from middle, high and even to college in a series of convoluted reasons but it doesn’t really matter.  You can poke plot holes a  mile wide in this show but it isn’t really about that.  It is a show about growing up, learning and loving.  I’ll say it again.  It had real heart.

It also had the courage to tackle a lot of tough topics such as drug use, biracial dating, alcoholism, divorce and rejection.  I love when entertainment takes children seriously and doesn’t assume they are stupid.  This has all the trappings of a silly show like Saved by the Bell but it had a lot more guts and the performers had great chemistry.

Some of my favorite episodes are:

I love this episode where young Cory switch places with Mr Feeny and does all can to convince the kids that Anne Frank is worth reading:

Sorry, it just makes me tear up every time…

Cory is taken with the free spirited Topanga and in season 2 he starts to notice her as more than a friend:

Like it or not Topanga’s definition of relationships is basically true these days.  Things seem to always be about the great love and not the building friendship we get with Cory and Topanga.

In season 3 Cory is forced to admit he is in love with Topanga.  Tell me this isn’t as good of writing as any rom com:

Shawn is also a key figure in the show, which was a true ensemble piece.  Unlike Cory who comes from loving and kind traditional family Shawn is forgotten by his father and abandoned by his mother.

Topanga eventually asks Shawn to give the graduation address and it is oddly perfect:

I’m afraid I’m making it sound too serious because the majority of the show is funny.  Eric, Cory’s brother, provides a lot of the goofball moments.

This still makes me laugh

Shawn also starts dating a black girl named Angela in season 4 and what I love is the race wasn’t really played up as an issue that much.  They were kind of treated just like Cory and Topanga which may not be realistic but a good lesson for kids that a biracial couple can be just like any other with the same problems as anyone else.

It also had one of the best finales ever

Now that my friends is how you end a show.

I know that’s a lot of clips but I hope it gives you a feel for the heart in this little show.  I really love it and all it’s wholesomeness and cheese.

Next week a spin off is coming out called Girl Meets World about Cory and Topanga’s little girl.  I’m cautiously optimistic.  The pilot looked pretty good and they have certainly spent a lot of time in development which usually means it’s not a total nostalgia cash grab.  I will let you know what I think.

What about you guys?  Do you like Boy Meets World?  If not, what show do you have nostalgia for?  Maybe you know it isn’t the greatest writing or acting or stories but you grew up with it and have an affection for it?  I know some people feel this way about the Brady Bunch of the Waltons.  What about you?