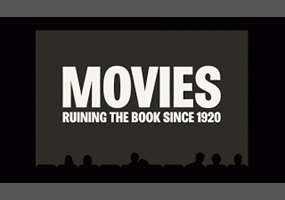 but maybe not always…

So you often hear the adage ‘the book is better’ in regards to a movie or TV show based on a popular novel.  However, there are some rare exceptions where the film actually improves upon the original source material.

For example, most people I know feel the Godfather movies are better than the book.  I have never read the book so I can’t say one way or another but I’ve never heard anyone argue for the book over the movie.

When I mentioned this topic on facebook a lot of people said comic book movies such as Man of Steel and Thor are better than the comic books.  Unfortunately I have never read a comic book.  I know.  I should be ashamed of myself but it’s true.

1. Batman Begins- I haven’t read the comic books but after the annihilation of Batman and Robin in the 90s there is no denying this reboot of the series was a significant step up.

While all my readers probably know I found The Dark Knight too violent for my taste I can’t deny it is well made and acted.  Batman Begins is equally well done but is a little less intense so I enjoyed it more.

2. Princess Bride- This is the clearest example of an adaptation that improves upon the original book.  In the book the author interrupts the story with ‘witty asides’ I found very annoying.  A little of that happens in the movie with the kid and the grandpa but it is way more palatable and less used story-telling device in the movie.

Everything else is pretty much the same but I would still take the movie over the book.

3. Sabrina- It goes without saying that I love the Audrey Hepburn 1954 version of this romance.  However, Audrey feels very young and Humphrey Bogart seems very old so their interactions are a little awkward.  It’s hard to get into the romance when he seems like her father.

I don’t know how much older Harrison Ford is than Julia Ormond in the 95 version,  but she doesn’t seem that much younger.  The cast surrounding the couple is also very strong with Greg Kinnear perfect as the playboy brother with Nancy Merchant and John Wood as Ford and Ormond’s mother and father respectively.

It is also another movie about work and whether we work to live or live to work.  You will probably remember that is a favorite topic of mine.

The movie will make you want to go to Paris and walk on bridges reading poetry.  It’s so magical.  I can’t think of a remake that is better done.  Can you?

4. You’ve Got Mail- This is tough because I love the Jimmy Stewart original about 2 coworkers who hate each other but don’t know they are secretly in love as pen pals.  In the 90s version we get Nora Ephron’s divine writing and it all updated to email.

I really think I could watch both of these movies back to back for 2 days without stopping and not tire of them.  I just love the story.  There are so many great lines.  The chemistry is wonderful and it is 2 more movies that are about work.

5. The Hobbit (haven’t seen 2nd yet)-  I know the first hobbit movie had it’s problems, but I think it is much better than the book.  I did not enjoy reading The Hobbit.  It is so slow.  I could use it as an insomnia cure.  At leas The Lord of the Rings books a lot happens.  The Hobbit is just small people camping for days.

It probably doesn’t hurt that the movie has Richard Armitage who I am in love with even as a dwarf.

6. Les Miserables- Victor Hugo’s book about dissidents in the 1830s France is widely considered a masterpiece but I’ll be honest I have never been able to get through it.  It is so slow and I like Middlemarch which is really slow so that is saying something.

I know people have problems with the recent movie but I loved it.  I love the stage musical even more.  When I saw it at 14 in NYC it was the first time that music really spoke to me.  Several characters that are side notes in the novel are really fleshed out in the play.  My favorite character Eponine is hardly in the novel.

On My Own and I Dreamed a Dream never fail to move me no matter how poorly performed.  I can be at some terrible recital and I still get goosebumps when someone sings them. I just love the musical so much.

7. Father of the Bride- This remake of the Spencer Tracy/Elizabeth Taylor comedy isn’t perfect but I have an affection for it.

If only for this scene it is better than the original.

8. Where the Wild Things Are- I did a whole post on defending this movie

I love it.  Love the artistry and the depiction of the thoughtful, brooding side of childhood.  It was one of the boldest, most inventive movie I’ve ever seen.

9. Perks of Being a Wallflower-  I think there is something to be said for watching a movie before reading the book. You usually have a more pleasant experience at the movie (and maybe that is why we usually like the book more?)

Perks is a movie I saw before reading the book and I liked the book, loved the movie.  The book is also told in diary form and that is so overdone.

Part of the reason the movie worked so well for me is it could have been filmed in my high school in the years I was attending high school.  It was the first time I really felt nostalgic for a movie.  It excited me in a way no other movie has in years.  I loved it.

Every time I see it I get excited all over again.

10.The Fugitive- This is probably the best TV adaptation as the original series was pretty standard police drama but it is one of the best crime dramas ever made.  Tommy Lee Jones is great.  Harrison Ford is great.

Harrison Ford seemed to figure out in the middle of his career that what makes an action movie hero great is when he almost loses every time.  You see that in Indiana Jones and in the Fugitive.  He is so close to being caught so many times and gets beat pretty bad by a man with one arm.

The special effects also hold up.  The train crash still looks convincing.  The writing is very well done and surprises me.  Just an overall great movie.

11. Bridget Jones Diary- This technically counts as two good adaptations- Pride and Prejudice and Bridget Jones Diary by Helen Fielding.  It even could be considered an homage to the 1995 miniseries starring Collin Firth who is in this film and playing a man named Darcy.

Renee Zellweger, who I normally don’t like, is very funny as Bridget.  She tries to do everything right but ends up messing everything up.  Aside from maybe You’ve Got Mail, this is the movie I tend to quote to other people most of the time.  So many good lines.

Another movie that is at least tangentially about work and the dreams of the modern woman for love, success and friends.

12. Sound of Music- The original play was written off of a book by Maria Von Trapp which I am told is pretty boring.  Rogers and Hammerstein took said story and turned it into a starring vehicle for Mary Martin, which is fine except Martin has a small musical range.

When they adapted it into a movie they removed 3 of the songs that didn’t work and added a new song I Have Confidence.  They also rearranged certain scenes so the Lonely Goat-herder song comes before the party and My Favorite Things comes when the children are scared.  That makes much more sense.

It is one of my favorite movies and I recently went to a Rogers and Hammerstein concert at the Utah Symphony.  When they played Eidelweiss it made me cry.  I can’t even explain it.  It’s just so touching.  (Don’t even get me started with the recent Sound of Music Live atrocity!)

I would also say that West Side Story is a stronger movie than play too.  In fact, a bunch of musicals are that way.

As Good As the Book- There are so many I could have picked that are amazing adaptations but I can’t really say they are better than the book because both the movie and books are fabulous.

To Kill a Mockingbird, Anne of Green Gables, All Jane Austen (seriously everything from Clueless to Pride and Prejudice has a remarkable winning streak for Miss Austen), North and South, Shakespeare adaptations, are all great movies and books.

Same holds true for Harry Potter, Jane Eyre and Christmas Carol.  The movies and books are both good.

What adaptations, remakes and reboots are your favorite?  Which one’s do you think are better than the source material?

6 thoughts on “Watch the Movie: Adaptations, Remakes and Reboots that Work”