(This is a somewhat detailed review so if you are the type that wants no plot or analysis before seeing a movie mild spoiler warning.  I couldn’t talk about it any other way.  I tried)

So I finally did it today- I watched 12 Years a Slave for Family Home Evening.  I’ve been debating for months whether I should see it because I had heard how intense and violent it was but being convinced it was an important film I decided to rent it and see what I thought.

I know many of my friends have had the same reservations so let me start with the violence. It is disturbing, sad, tragic whichever adjective you wish to use.  There is no doubt about it, but I do think some of the worry is a bit overblown.

It’s kind of a hard movie to review. At least I’m struggling to put my reaction into words. (I’ve written this like 3 times and started over unsatisfied with my portrayal).

12 Years a Slave tells the story of Solomon Northup, played by Chiwetel Ejiofor, a freeman in pre-civil war Washington DC who is abducted and forced into slavery for 12 years.

It is not a hopeful movie, and perhaps that is appropriate.  Even when Solomon is rescued after 12 years it is done slightly begrudgingly with more persuasion than the audience feels should be required after witnessing such things.  I have no doubt such hesitation is completely accurate but I’m just saying it is not a sentimental movie in any way.

In fact, at the beginning Solomon is kidnapped with a woman who is torn away from her children (who she is tricked into coming after and then captured).  This woman cries for days to the point of irritating all around her.  That’s where the movie starts- the most guttural humane reaction of Mother for her children is an annoyance and a bother.

I’m not saying this as a criticism but it is much more disturbing than any of the violence displayed (which again is very disturbing).  It’s almost as if the movie is saying ‘stop crying and listen’.

Another running scene that is almost crueler than the whippings is when the slaves are forced to dance before their masters as if all was well and happy.  It makes you sick.

In a lot of ways this  movie reminded me of one of my favorite books Incidents in the Life of a Slave Girl by Harriet Jacobs/Linda Brendt; however, we as readers feel more invested in Harriet’s story than Solomon’s and there is one great friend in the book that gives some hope.

It’s kind of like in the telling of the Holocaust.  I think there is a place for hopeless, tragic versions like Night by Eli Weisel, but also for Man Search for Meaning or The Hiding Place.  I’m glad I read all of them.

Anyway, Solomon goes through a lot of masters/white men played by Paul Giamatti (as one of the slave merchants), Paul Dano, Benedict Cumberbatch (as a slave owner who seems kindly but fails to do the right thing), Michael Fassbender (as the main master and a man who has convinced himself that all he does is validated, even required by God), Sarah Paulson is chilling as Fassbender’s jealous wife, Brad Pitt as a Canadian who finally has some courage. 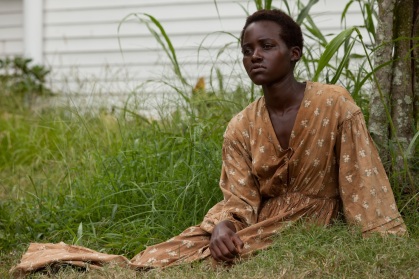 Oddly enough there aren’t many developed black, slave characters.  Besides Solomon there is Patsey. She is played by Luipita Nyong’o. Patsey is tortured by Fassbender, and she is a quiet, shy sufferer. (In certain scene Fassbender even has a strange dependence upon Patsey) More briefly seen is Alfre Woodard who is excellent as a fellow slave that has risen through the ranks and now has slaves of her own- very chilling. 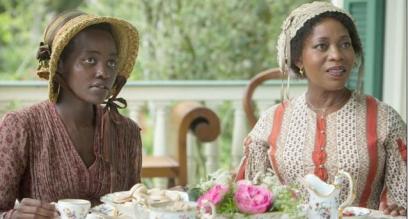 A good movie to compare 12 Years a Slave too is Stephen Spielberg’s Amistad, which tells the story of a mutiny aboard a slave ship in the late 18th century.

12 Years is a much smaller movie than Amistad.  Spielberg seemingly can’t resist the dramatic music cues and soaring speeches but even without that Amistad’s story is about a ship full of slaves, the Congress, an ex-president and a case before the Supreme Court.  It all feels bigger than 12 Years a Slave.

Now I think 12 Years is a better movie than Amistad because of it’s smaller, more intimate nature.  At all times, the audience is kept at a bit of a distance from the story, violence and even Solomon himself.  Most stories like this have narration or a scene where someone explains why these things are wrong.  That is not necessary.  Everyone knows why.

However, some have criticized the film as being too small. Peter Malamud Smith of Slate said:

I can see why Smith feels this way, but I disagree. I think I can learn more and feel more empathy for one person’s story than a slew of faces.  This is Solomon and Patsey’s story and only one of them escapes- a pain that is as much if not more deeply felt than a shipload of humanity suffering in Amistad.

Like I said, both have their place and are worth telling, but I think 12 Years a Slave is the better movie.  In some ways I wish we got even more inside Solomon and Patsey’s head. They are the emotional core of the movie, and I could have done with one less beating montage and more of their discussion.

That said, I didn’t cry as much as I thought I would in the movie and that kind of disturbs me  given the images. But when I think back to the beginning with the slave girl sobbing to the point of annoyance I wonder if the movie-makers are trying to teach me something, and that perhaps my response is intended?

Maybe by showing that lack of empathy early on, the movie is cautioning us against such sentimentality and asking you to think and absorb what really happened to these people with no exclamation points needed?

The most heartbreaking scene in the movie for me (mild spoiler) is when Solomon thinks he has found someone he can trust with a letter to his friends up North. You see the relief and hope in his eyes (again the movie has little hope) and when that trust is betrayed it was more brutal than any beating for me.

Sarah Paulson also has some of the most shocking scenes as Fassbender’s jealous wife.  In many shots we see her hovering in the corner watching the horrific scenes, and even encouraging them to take place.

The ultimate example is when Patsey goes to get soap from Alfre Woodard because Paulson has refused to allow her to clean to the point where her stench is making Patsey ill. Worried she has ran off Fassbender becomes enraged and Paulson stands by to watch.

If I’m going to nitpick the movie is a little cluttered and I kind of wish there were a few less white guys and a few more slaves to know and feel for, but I see why they did. Still, a few characters could have been trimmed.

Also some of the accents are very strange. I read that director Steve McQueen was going for specific regional dialect but it sounded like Brits and Germans trying to sound Southern.  Surely they could have gotten a few authentically Southern actors?

But like I said, that’s nitpicking.  It’s a very strong movie.  A few months ago I got in a debate with a person on twitter over Gone with the Wind and it’s portrayal of slavery.  I wish that person could see 12 Years a Slave and then tell me with an ounce of sincerity that Gone with the Wind is anything but complete fantasy (entertaining fantasy you can make an argument but at best it’s a well-meaning soap opera).

So, in the end- the violence is bad but not as bad as some have made it out to be.  It’s uncomfortable and will make you squirm in your seat but I think that’s appropriate.  It’s a small movie focusing on 2 slaves and 6-8 white masters.  It’s not heavy-handed with modern preaching (like The Conspirator a couple years a go…)

It’s a movie that will make you think.  Think about evil and how we rationalize freedom away from people because of a label.  How we make it ok to do horrible things to each other because that person is black, christian, jewish, muslim whatever.

The performances are all excellent and as an educational experience I highly recommend 12 Years a Slave.

I can see why you wouldn’t want or need to see the movie because of the intensity and violence, but I would at least challenge you to learn about what really happened from as many angles as you can. Do not be satisfied with anything too neat or dainty.

You should be left wondering why.