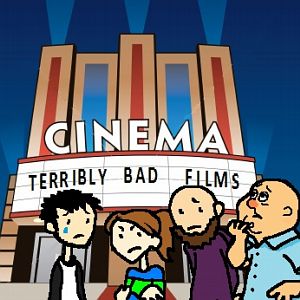 The other day I was talking to my sister and she said ‘He’s Just Not That Into You’ was her least favorite movie of all time.  I was shocked by this because while it is not perfect there are definitely things I like about that movie.  For one, I think some of the writing is good, and a lot of the performances I like.   Really if you took out the Scarlet Johansen plot line it would be a favorite rom com of mine. Maybe part of it is I liked the original non-fiction book.

This discussion made me think of what movies I hate and wouldn’t watch again unless dragged in by gunpoint.  Just to be clear, most notoriously bad movies I am smart enough to stay away from so you will notice there is no Battlefield Earth or scores of lame horror or  Adam Sandler movies on my list.   I am grateful to the critics out there who take that bullet for me and warn me from the horror.

Most terrible movies are from my college years because I was less particular back then and the $1 movie theater steered me wrong many a time.  So here goes.

My most hated movies (in no particular order)

1. Contact- I know many love it but I hated it.  I have never looked at my watch so much.  Unbearably long and completely condescending to anyone of faith, even as a high schooler my eyes rolled throughout the screening and I wanted to leave after about 20 minutes.  Science is treated as perfect and religion as the folly of the foolish and simple-minded.  Please! This is also the most boring alien movie ever made (although, Close Encounters of the 3rd Kind would be a close second). In fact, I think it is the most boring movie ever made.  Contact is the first movie I remember seeing that I truly hated.

2. Superstar- I have walked out of 2 movies in my life and both will be on this list.  I made it through about 20 minutes of this awful SNL movie before my friends and I looked at each other and all left.  I don’t think I’m much of a prude but when you have a character in your movie dressed like Jesus and openly mock Him that is where I draw the line.  You can make fun of my faith’s idiosyncrasies and strange beliefs but do not mock my Lord.

3.  Armageddon- Another movie from high school that I loathed. There is no real plot just one blast and lofty speech after another. The romance is so stupid with a love scene involving animal crackers.  Really? I hated it so much I went into another room and talked to my friends parents for the last 30 minutes or so.

4. Drop Dead Gorgeous- This is the other movie I walked out of.  It actually made me cry. Everything from the anorexic beauty queen rolled out in a wheel chair, to the shrill contestants, to the cold and callous murder of young girls, the whole movie was incredibly cold, unfeeling and creepy.  And what makes it more disturbing  is that it is supposed to be funny.  Who thinks such disgusting behavior and images are funny? It’s beyond me. What made it over the top for me is a scene where a contestant dances on a cross with a Jesus doll surrounded by crosses and is carried off the stage as if she was Jesus.  I was on a date and I started to cry and had to leave the theater and went into the lobby for the rest of the date. I still remember some of the disturbing images and it was 12 years ago!

5. Lizzie McGuire Movie- I took my sister to this movie and I think even she knew it was a dud.  Perhaps I should give it a break because its a dopey kids movie but no, Pixar has proven that kids movies can be twice as smart and engaging.  The thing that gets me is why not make a movie about a girl going to Europe and experiencing a new culture, having a neat experience? That could actually be a good movie.  Why do you have to make her into some pop tart/celebrity? It’s like Princess Diaries was a hit so studios have been remaking it for the last decade.  Move on.  Write a good script!  Teens and young girls deserve better than the shlock that is served to them. You saw the same thing with the recent Monte Carlo, which was actually kind of cute with some engaging characters until they went all Hollywood on it. So lame.

6. What Happens in Vegas- Of all the terrible rom com’s I’ve been dragged to by friends this one is the worst (Ugly Truth, 27 Dresses, and any Jennifer Aniston movie comes to mind as well).  The thing that makes this one especially bad is you have 2 characters that are so unlikable, forced into the most strained premise imaginable and then they are completely hateful to each other.  Why would anyone these people to be happy individually, let alone together?  It was painful to sit through.  Every performance and line of dialogue was awful.  If I wasn’t there for a friends birthday I would have left.  Tip to Hollywood- stop turning board games, catch phrases, lame TV shows from the past, into movies.  If you don’t have a good script donate the 30 million to make the movie to a good charity and make a movie about that!

7. Good Will Hunting- I figured I had to pick one movie that everyone else loves.  I hated this movie . First of all, the plot is completely obvious and predictable.  How many hundreds of movies are made about the struggling genius who finds his way through an inspirational teacher (in this case a shrink. Sigh…).  The performances are tired, wooden and mundane, and evidently Oscar’s idea of a good script is profanity every sentence (and I mean every sentence).  I can handle some profanity but when it is just done for no reason and at such extremes it drives me crazy.  So lame! I actually found it to be boring and stupid.  Definitely most overrated movie I can think of (although I thought the Breakfast Club was way overrated, but, it does have some good performances).

8. Pearl Harbor- While the attack on the harbor is well done, it goes on forever, until it just starts to deaden your senses.  The romance is SO STUPID and obvious.  The acting is terrible.  The dialogue is wooden and dumb.    What those people went through and the sacrifice they made deserves better than this long, overwrought, idiotic ‘blockbuster’.

9. All Dr Seuss Movies- Aside from the short animated special made in the 60’s every attempt to turn Dr. Seuss’s brilliance into a feature film have been awful.  They are definitely the worst kids movies I’ve seen. First, we were horrified with The Grinch, with Jim Carey looking like some kind of large weed that had just been pulled out of the ground.  Then we got the Cat in the Hat with Mike Meyers as a bizarre amusement park character tormenting 2 rotten kids (such a strange, unsettling movie).  Horton Hears a Who was the best of the attempts but still strained and full of glaring colors.  Then recently we got The Lorax which I hated.  It is way too long, with boring, putrid colors, the music stinks, and  it feels like a 17 page book stretched to 90 minutes, which it is.  It can’t be done!  Stop trying and leave the poor man’s legacy alone.   Next we will see Oh the Places You’ll Go in movie form.

10.  An Inconvenient Truth- Al Gore standing in front of a power point for 2 hours with intermittent clips of global disaster= Oscar! If anything should make you discount the academy’s opinion, that is it.  So boring and did I really hear anything I couldn’t get from a quick search on google?  Boring, condescending and overly-simplistic.  Amazing California hasn’t sunk into the ocean yet?

11. My Dinner with Andre- I’m all for artsy, strange, inventive movies but this movie is so dumb and boring I couldn’t believe it was even made.  I had heard it was a hipster gem and that people loved it.  I kid you not the whole movie is a dinner with Andre.  It is 2 men eating dinner for 2 hours.  That’s it.  Nothing happens.  The conversation isn’t even interesting.  They aren’t good friends and they spend most the movie talking about the various plays they’ve been in. Kill me now.  I fell asleep for long stretches.  For the life of me I don’t understand what could be so great about this movie?  I thought it was awful.

12. I have to include Film Socialism a completely baffling art piece of bizarre images and strange captions that is supposed to be existential and moving but is merely maddening.  To read more of my thoughts on this movie read this post https://smilingldsgirl.wordpress.com/2012/01/31/good-artbad-art/

So there you go.  My least favorite movies.  What are some of yours?

18 thoughts on “Movies I Hate”