So today I’m going to give you a few recommendations that might surprise you.  For years I had a no R rated movie rule. That was when I still had faith in the MPAA.  Now I have a different approach, I use screenit.com to find out what is in the movie no matter the rating.  There are many movies that only make an R rating because of language and while profanity is unfortunate I think it can be an authentic way of representing a character because let’s be honest some people kuss like sailors.  It just doesn’t bother me the way violence or sensuality does. I realize this is rationalization but there you go.

I think there are movies made for adults and are appropriate for just adults.  That doesn’t mean they are gratuitous or gross but just mature.

So 2 movies I would classify for mature audiences that I’ve really enjoyed lately are:

Friends with Kids- There is an unfortunate amount of profanity in this movie and some mild sensuality but I thought it captured quite well the changes that happens in adult relationships when children come into the picture.  Every couple seems to handle the stress and pressure differently.  Some need more support of friends, others find maintaining adult friendships to be a burden that they can’t deal with once the children come along.  This can be challenging for all involved.

Last year there was this article floating around facebook of a single woman complaining to an advice columnist about how her friend with kids never had time for her any more.  This letter made me mad because it was so over-the-top that any legitimate concerns the single woman (or other women in her situation) might have had  felt petty, selfish, cold and inconsiderate.  Surely they could have found a more nuanced letter expressing the same concerns?  I felt like the woman was a devil and all Moms were innocent angels.  Made me mad.  I felt marginalized by it and that the worst possible example of my lifestyle had been used to tar and feather us all.  After about the 30th read through I couldn’t take it any more and finally said something.

Quickly I started one of my longest facebook threads yet.  It was clear this change from urban tribes to having friends with kids is hard on both sides.  Each couple must deal with questions of how to manage their time, resources, love, and new families.  As a single woman,  I’ve had moments of true grieving when a friend seemingly moves on from me to their new family lifestyle.   I know young Moms have felt the same about their single counterparts. At the very least it can be suddenly hard to relate to people that were so relatable for years.  The problems of raising an infant can seem like another world from the problems of a single man or woman.  I’ve adapted and learned over the years but it can still be a challenge.

Even if there is no change in attitudes the differing time schedules can force a change in the friendship.  A friend you saw everyday or weekly may only be available for birthdays or special occasions.  This is reality and it has be adjusted to.  Certainly keeping the friendship is more important than anything else and worth any sacrifice but it can still be difficult for both sides.  So few movies or books really touch upon these transitions in a meaningful and enriching way.  In the end, I believe strongly that relationships can thrive after this transition and be even stronger as a result.

Anyway, that’s why I liked this movie.  I thought it  had a lot of good dialogue about the adjustment to parenthood or lack there of.  The story centers around Adam Scott and Jennifer Westfeld who are friends that decide they want to have a baby and still date other people. They are tired of being left out of the parenting world that all of their friends are participating in (any singles or childless over 30 can relate to that feeling!).  They figure they can get all the benefits of raising a child without the messiness of dating, romance, divorce etc.  This is obviously a foolish idea but it works to get the plot rolling.

There are 2 other couples  that communicate with each other and with the group in a realistic manner, like I can actually picture all of them as real couples.  I particularly liked Maya Rudolph and Chris O’Dowd. They are the most functional of  the couples and handle the stress of child-rearing with a lot of humor laden chaos.  Jon Hamm and Kristin Wig are both good as a couple that begins to burden their friends with their marital problems, risking the happiness of the whole group.

I can’t say  I have a cohesive group of friends as shown in the film (at this time at least) but I have lots of married and single friends, and I felt like I could relate to the dialogue.  It is a dialogue based movie  with many scenes  set in one apartment but it worked.  It’s also very funny, with humor coming from realistic situations, not silly slapstick.

My only wish is that they had included a truly happy single within the group but you can’t have everything in the movie. I think Hollywood doesn’t believe the truly happy single can exist.  (We think we’ve come so far from the days of Pride and Prejudice but look at the mopey ladies of rom coms and I don’t know!).   Megan Fox plays a girl who has no interest in having children and it is as if she wants to kill puppies.  A woman not wanting to have children, how can that be! 🙂

It is also a bit predictable.  We all know that Adam and Jennifer’s platonic plan isn’t going to end well but I just found the dialogue so engaging that I didn’t care if the plot followed a formula.

In the end, I really enjoyed it and for adults (particularly adults in their early 30’s going through this transition) I think it is a great pick. 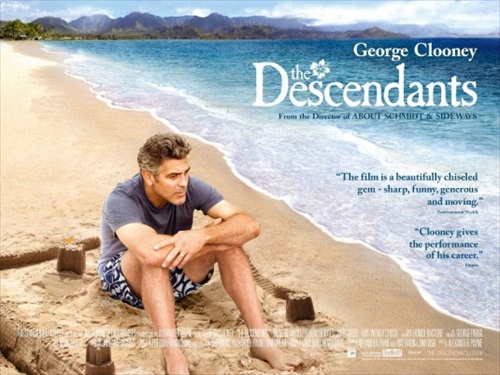 Descendents- I know everyone saw this last year before the Oscars but I didn’t get around to seeing it until recently.  It stars George Clooney as a man who finds out his wife, who is in a coma, was having an affair (who would have an affair on George Clooney but it works).   George has been trying to raise his children carefully but they have turned into selfish brats anyway.  He is also the descendant of a massive plot of land on Maui island and he along with his cousins must decide whether to sell the property.  So, basically poor George is having a tough patch.

Judy Greer is also in the movie with a small but impactful part and Matthew Lillard plays a believable and cowardly other man (again who would pick Matthew Lillard over George Clooney but it works).

Part of what makes the Descendants so good is that none of the drama is over-done.  Really not a ton happens but at the same time everything happens.  There is no last minute conversation with the wife.  No over-the-top moment of truth.  Everything is subtle, soft and perfect.  At least in my life most of the things that should have loud music accompanying it in my eyes, most observers would think ‘that’s no big deal. Just an ordinary life’.  That’s the point.  The drama of ordinary life.

The thing that is amazing is with all of that sadness the movie is quite funny.  It doesn’t feel drab or depressing.  I’m going to give some of that credit to the beauty of the islands but the script is good enough to portray real life with all its mixture of laughs and tears- sometimes all at the same time.

The Descendants is only for adults as it does have a fair amount of profanity but again it did feel authentic to the characters and how they would probably talk when going through such difficult situations.  None of it was for show or to be shocking.  There isn’t anything else offensive that I can remember but if you want to check look at www.screenit.com.

For both of these movies go to screenit.com read the content and decide if it is something you want to see.

So, there you go.  2 movie recommendations.  Let me know what you think.  And if you hate them.  Sorry!