So, some of you know I have 1 sentimental collection- 12 Madame Alexander Dolls.  I started this collection when I was 8 or 9 years old because my grandma collects them.  The first one I got was near my birthday and we were at FAO Schwartz in San Francisco.  They had a special edition snow white doll that I wanted so badly, begging my grandma to get it for me as a birthday present.

She said “you can’t take care of a special doll like that”.  This was a well justified comment as I was a messy, messy kid.

“I promise I will take good care of it.”  I have always done well when given a challenge and a challenge it was!  Over the years I have treasured my dolls, displaying them proudly as  a beautiful collectible, a reminder of my relationship with my Grandma, and a mark of my childhood dreams and ambitions.

I’m proud to say I still have most of my dolls including my original love Snow White:

I’ve only had two doll casualties over the years.

The first one was when I was 13 or 14.   My cousins were staying at our house and my little cousin Elizabeth decided to play with my dolls.  This included taking out the braids to my Hungary 1981 Alexander doll.  The rest could be redressed and salvaged but not the Hungary doll. I’m not kidding when I say I was devastated and oh so angry.   What made it worse was that nobody seemed to care about my loss and brushed it aside as ‘kids do things like that. Isn’t that amusing…’.  While that may be true, it doesn’t help another kid who has seen her prized possession destroyed.

Ever since this happened I have always tried to be more sensitive to a child’s sadness over a lost toy or game.  It may seem stupid to us but it may be a big deal to them.  My dolls staying in pristine condition meant that I could take care of something, that I was independent, and responsible- traits that have always been at the top of my must have list!

Anyway, I was pretty upset but never thought to replace it figuring it was an old doll and unreplacable (this was before ebay!).  However, recently I happened to check on ebay and there it was for a great price! (great and bad thing about Alexanders is that most of them do not go down or up in value from the price they are originally sold at ).  The child in me was vindicated and happy to see the doll return to my collection- love when I can do that!

Anyway, the 2nd doll loss happened a few weeks ago.  Because of my chronic pain I occasionally have my apartment cleaned.  On one such occasion they cleaned, left and I thought nothing of it.  The next day I noticed the clothing on my Alexander India 1980 doll was askew.  To my horror as I adjusted the sash the head came off! And then the elastic inside broke and the whole doll became dismembered!

Initially upset I emailed the cleaners and they were actually amazingly sympathetic and offered to pay for the doll to be replaced.  She even said she felt ‘sick inside for me’.  Afterwards I found out that occasionally an old Alexander’s band will become brittle and snap without any provocation.   I offered to pay for my cleaning and still working that out but am still grateful for their sympathy (much more so than I got from the loss of my Hungary doll!).  They are honestly the only thing in my apartment I really care about.  Maybe some of my Christmas ornaments are as valued but that’s the only thing I can think of to compare.

Fortunately I also found it on amazon for a good price (not quite as great a deal as Hungary but its more rare).  Now all of my dolls are restored and looking beautiful! Hopefully my grandma won’t read this blog but if she does she will probably forgive 2 casualties after all these years!

I’m not a nick-knack kind of person and I admit I’m being a bit melodramatic for comedic effect, but everyone should have a collection right?  I have my books and my dolls!  What do you collect?  Do you have anything from childhood that you treasure?  I think anything that we value as a child is extra meaningful as an adult.  I know its just a possession but its symbolic of the child I was and the relationship I still have with my grandma, who is one of my best friends (and who has always seen my potential despite the mess!).  I’m grateful to have both dolls back and that it all worked out.  🙂

Gone with the Wind- 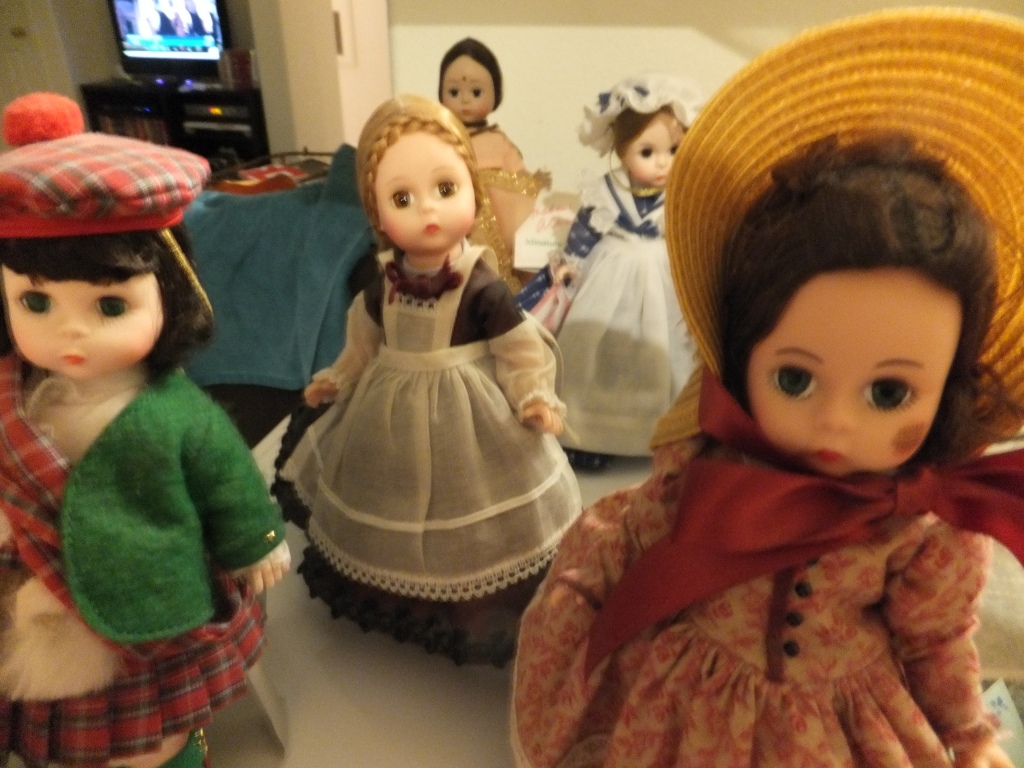