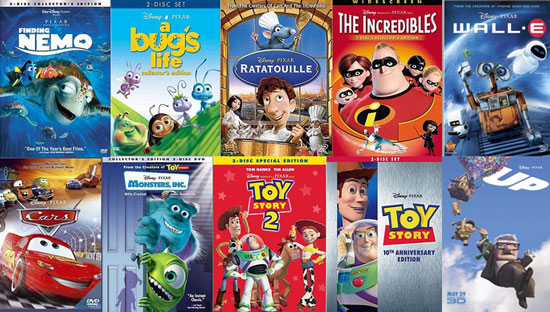 While I was away on break one of my most anticipated events of the summer occurred- Pixar Studios released its latest pick, Cars 2.  Unfortunately, this appears to be their first dud with a 35% rotten rating on Rottentomatoes.com.  This comes after a remarkable winning streak with 16 years of fresh movies.  Their previous low was the original Cars at 74%.

I’m actually a little sad to not have my summer Pixar movie (although I will probably see Cars 2 eventually).  As any reader to this blog knows I love movies- particularly films with good writing and interesting characters.  You wouldn’t think this would be a difficult request but of the thousands of films that come out each year it seems only a handful are truly special.

My favorite Pixar movies have it all.  The animation is stunning, the characters funny and interesting and the story is good.  Even a movie like WALL-E, which is very different still drew me in.   On Rotten Tomatoes the first two Toy Story movies have 100% fresh ratings with Toy Story III, Up, Monsters Inc, Finding Nemo, Wall-e, and The Incredibles all over 95%.

Part of the reason I have always felt connected to Pixar is when I was 9 0r 10 my uncle Mark worked there and gave us a video of their  animated shorts. When Toy Story came out I felt like one of the few people who knew what the jumping lamp in their logo meant because I had seen the short years earlier. We also saw Tin Toy, Red’s Dream and Knick Knack years before they were featured as introductions to various films.

It’s always fun to be ‘in the know’ before others- makes you feel special.  I know my Mom and Sister felt this way when Harry Potter became popular.  I’m not sure how she heard about it but they had been ordering the books on the UK Amazon.com for years before they hit US markets.  That was certainly a find!

Anyway, I thought I would give you my list of favorite Pixar movies and try to explain why but truly I love them all.  I will let you know what I think of Cars 2.  After all, I might like it.  Roger Ebert gave it a great review, so you never know. He actually liked it better than the original.

1.  Up- I have seen this movie so many times and it still moves me.  It is funny, sad, and tender-hearted.  Particularly the opening montage depicting a marriage is for my money the most beautiful five minutes ever in film.    The other day I was watching it at the gym and started crying (and I am not a movie crier).  It was funny because I think everyone thought I was having quite the emotional work out!

2.  Finding Nemo- I just rewatched this movie and was blown away once more.  Just the artistry is beautiful.  If you stop to watch each frame the animation of the ocean continues throughout every inch of the screen.  Every character in this movie is funny and sincere- I particularly like the sharks at fisheaters anonymous. It also has terrific voice actors, funny dialogue and a heart tugging story.  Never did a dentist look so sinister!

3. Toy Story- Great voices, endearing characters and a story pleasant for adults and children.  Are there better characters than Woody and Buzz? Teaches so many lessons about friendship and the danger of pride and competition with others. A game-changing classic.

4. The Incredibles- As previously stated in my review of Summer movies, I do not like super hero movies. Leave it to Pixar to win me over with the Incredibles.  A great movie about a family of super heroes that are living on the down-low as normal citizens.   The best part of the Incredibles is it uses the cliches while still making them work- giving us a weaselly villain, a gadget/clothing guru and action scenes mixed with humor.

5. Toy Story II- Rarely does a sequel equal the predecessor but this one does.  The great characters of the toy collector, cowgirl Jesse and the Barbies are wonderful plus the best music of any Pixar.  You would have to be made of stone to not feel emotion during Jesse’s song, When Somebody Loved Me.

6. Ratatouille- How do you make a movie about a rat and still make it appealing?  I hate rats but love Ratatouille.  Some of the best voice work in all of Pixar and a wonderful depiction of a critic with the duplicitous Anton Ego (I love how his office is a coffin!).  I really want to go to Paris someday and movies like this make me want to go even more…

7. Toy Story III- For my money the best part 3 sequel ever.    How do you take the same characters and make them engaging and funny a full 15 years after the original?  Even the Star Wars and the Godfather movies got weaker at the 3rd entry.  I love the addition of Sunnyside Daycare and all the characters and plot points that setting provides.  I also love the idea of the complicated emotions of growing up- it is exciting and sad at the same time.

8.  Bugs Life- The forgotten Pixar film but I recently rewatched it and found it funny, charming and very creative.  Great voice work and who knew grasshoppers were so evil?

9.  WALL-E- Probably the most controversial Pixar, with some loving it and others finding it a big bore.  It reminded me of an old silent movie.  I like that it didn’t tell you everything.  It just presented images and you were free as the viewer to fill in story details.  In a world where original ideas are few and far between I appreciate the gumption it took to make WALL-E.  To me it was a work of art in film-form.

10. Monsters Inc- Its strange this movie is so low on my list because I really liked it. In truth all of the Pixar movies were on my favorite movies of the year when they came out, so they are all winners.  Monsters Inc is a brilliant idea- taking the classic notion of kids fearing monsters in their closet and creating a great story.  I love the voices and dialogue of Mike and Sully.  Also, Boo is so cute.

11. Cars- I think I would have liked Cars more if it had not been about a world with only cars.  Why not make it like Toy Story where the humans don’t know the cars exist?  Its just hard to make a full spectrum of emotions with a car- partly because they don’t have arms or bodies.  I did like the story and the theme of small-town America being forgotten.  The vistas and artistry is beautiful as well as good voice work throughout.

So there is my list…Enjoy some great movies (All are available on Netflix with Toy Story III being a stream). All of these movies I could watch again and again (and I have!)