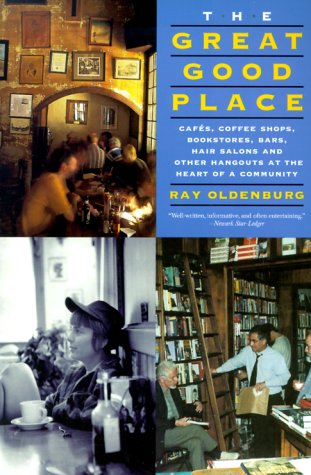 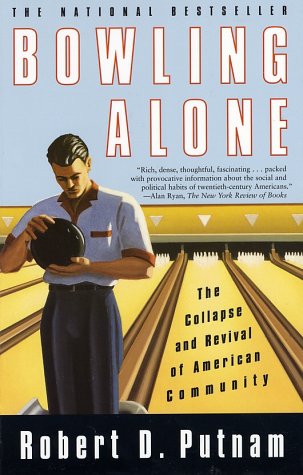 In my last post I mentioned how inspired I felt by Glenn Beck’s new 9/12 initiative.  Normally my posts are viewed by a handful of family and friends (15-35 visits a day). Both of the political posts I did caused huge upswings in visits- especially my last post.  I was shocked to have nearly 500 visits in the last 3 days! That post also had a record 11 comments.  It was great!

Clearly this discussion has touched a nerve with people and it caused me to wonder why?I asked the same question during the Democratic primaries- why was the country more interested in a community activist from Chicago than the slick experienced Clinton machine? I believe the election of President Obama, and to a smaller extent the initial response to the 9/12 project, shows the desire of the American people to connect with a cause- to be gathered together for a greater good.

This is an interesting trend because for years America appeared to be in the opposite direction.  Throughout the 80’s and 90’s individulaism grew along with a new sense of self-suficiency.  Without a major war or conflict to gather citizens, group behavior declined- particularly political action.  Such involvement became more of a hobby, rather than a necessity.

These trends are demonstrated in two of my favorite non-fiction books:  The Great Good Place by Ray Oldenburg and Bowling Alone by Robert Putnam.  They are both excellent reads with eye-opening ideas.

In the Great Good Place Oldenberg says that every human being needs three places: the home, work, and the third place.  The third place is the focus of the book because in it “neutral ground provides the place, and leveling sets the stage for the cardinal and sustaining activity of third places everywhere.  That activity is conversation.  Nothing more clearly indicates the third place than that the talk is good.”  Examples of third places include bars, pubs, coffee houses, bookstores, cafes, parks and even lobbies.  While these places may seem superficial and unnecessary, Oldenburg argues that they provide “precious and unique benefit” to those who frequent them including “the leveling primacy of conversation, certainty of meeting friends, looseness of structure, and eternal reign of the imp of fun all combine to set the stage for experiences unlikely to be found elsewhere.  These benefits also derive from the sociable and conversational skills cultivated and exercised within the third place”.  Basically the third place provides attendees an unpredictable and free environment of sharing that you just can’t get at work or in the home.

Having established the value of the third place Oldenburg goes on to explain their decline with the rise of suburbia.  Actually it’s not so much a decline, as it is a replacement with mediocre substitutes.  The carefully planned and placed Starbucks, Borders, and Chilis of the world attempt to create community but  feel pretty lame in comparison with their traditional counterparts.  I should know because I live in Utah- the home of chain everything.  Especially in Utah County, it is hard to find any unique restaurants or stores- and if they aren’t chains then they are rapidly becoming one.

The best community involvement  I seem to be able to do is sign up for a class at JoAnn Fabrics or look for a book club on Craigslist.  There is almost nowhere I can go by myself to just hangout.  The movies is the best I can come up with but still that’s kind of lame.  The problem of not having a third place is that you end up either alone or  surrounded by people who only think like you do. You never feel a real sense of belonging or sacrifice for the group.  Oldenburg says “The effect of the third place is to raise participants spirits and it is an effect that never totally fades.  Third place interaction is a matter of ‘making other people’s day’ even as they make one’s own in a situation where everyone gains.” As you interact together the patrons of the third place also get to see one another in a positive, happy light, instead of the grim view often found at work or are in other interactions together.  Think about it if you had shared a Coke with a new friend- would you feel as inclined blow up at them if they cut you off in traffic?  No.  We have lost both a sense of authentic community and an outlet for free expression in our country, and I think it has consequences. For one, President Obama’s election (for better or worse) was certainly helped by the underlying need for community activism that he successfully tapped into.

In Bowling Alone, a similar vein of thought is followed.  Instead of third places Putnam follows the registration numbers of civic organizations, clubs, and bowling leagues.  Groups such as the Lions Club, Masons, Elks Lodge, League of Women Voters, etc have all seen declining memberships  since the 50’s when they peaked.  Putnam says the old members didn’t drop out “but community organizations were no longer continuously revitalized as they had been in the pst, by freshets of new members”.  Even membership in the PTA has gone down every year since the 1960’s.  This may seem like a meaningless statistic but it has many ramifications.  For instance, the philanthropy encouraged by such organizations declines. “Altruism of all sorts is encouraged by social and community involvement.  Churchgoing and clubgoing, for example are among the strongest predictors of giving blood…To predict whether I am likely to give time, money, blood, or even a minor favor, you need to know, above all how active I am in community life and how strong my ties to family, friends and neighbors are”.

The isolation that Putnam talks about has gotten so bad that most of us do not know our neighbors or have even introduced ourselves (myself included).  We click the garage door and then are shut away in our little world.  We then gather only with people that we have similar tastes with (which brings up another good book I just finished- The Big Sort by Bill Bishop but that’s for another entry).   Even on the internet we communicate in social networking sites such as Facebook only with like minded friends who we agree to come into our lives.  In the old civic organizations, clubs and churches a variety of people could participate and find common ground. In addition,  people that in previous generations would have been included in community discussion- even begrudgingly- are now left alone (unless they are able to find other nerds to hang out with!).  Instead of uniting our country, we keep dividing and dividing.  Its no wonder the politicians in Washington are so diametrically opposed to each other’s policy.  They have been living in a society where they are surrounded only by like-minded individuals and rarely have to branch out. When the founding father’s met they were able to find livable compromises within a diverse group of people.  Perhaps this was partly due to the spirit of community they had been raised in?  Perhaps if they had been isolated and only fed political dogma from one side, the compromises would not have happened and our country would not exist?

Who’s to know! Both authors have forced me to look at the world I live in differently.  Maybe it is because I have lived on the east coast, west coast, Midwest and in Utah, but I pride myself in being open minded.  In listening to every side of an argument and trying to find common ground.  This seems to be a lost art and part of the blame goes to the loss of the third place and the community spirit.  People like President Obama and Glenn Beck (to a smaller extent!) have tapped into this fundamental need and are allowing citizens to speak their peace- or at least giving them that feeling.  It is a shame such attempts at community activism are not more diverse in opinions and ideas but they are a step in the right direction.  Hopefully we will learn and find ways to expand our reach within the community.  I know the few attempts I’ve made have benefited my life.  I have a goal to do at least one act of community service a month.  Plus, I also look for ways to reach out to new friends.  I go to book clubs where I don’t know anyone, cake decorating classes, and even cruises!  I am better person because of such endeavors and I challenge each of you to do the same! Also, read those books.  I hope I explained their ideas in ways that make sense. They are great!

6 thoughts on “Bowling Alone and the Great Good Place”